Detroit Electric is an iconic brand in the electric vehicle sector, an original innovator and pioneer that began life in 1907. Eight years after the brand's resurrection by CEO Albert Lam, excitement is building at the heart of Detroit Electric once again.

The company's first production car, the SP:01, delivers on Detroit Electric's mantra of 'Pure Electric Performance', offering superior performance, driving dynamics and class-leading handling. The limited edition SP:01 will be followed by a range of all new, electric and hydrogen-electric hybrid vehicles.

All around the world, Electric Vehicles are growing in popularity. They are the future of motoring, moving silently around our towns and cities, and are at the cutting edge of modern technology. Or so it would seem.

They are a sight we are all becoming used to seeing, but they are certainly not new. Residents in American cities like Denver were very familiar with this scenario over a hundred years ago.  Electric cars were a big part of the early American motoring scene, and the infrastructure to maintain and recharge them was well established. 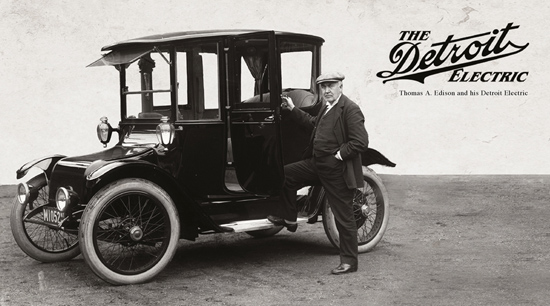 By 1912, there were numerous American electric vehicle makers, with Detroit Electric both the market leader and the most prolific, going on to make around 13,000 cars – a production world record for the twentieth century.

“Detroit Electric didn’t have patents and rights to innovations that gave them market leadership, they just did a better job than everybody else,” said American electric car expert Galen Handy.  “Except for the lighting and shaft drive components, they made almost everything ‘in house’.  In 1909, they bought Elwell-Parker in Cleveland, which made the best motors and motor control systems, and the cars themselves were very well built.”

It’s worth noting that the Elwell-Parker business cost Detroit Electric about half a million dollars, which shows the value of the electric vehicle market then.

Galen’s interest in Detroit Electric is personal.  His father, Jamison ‘Jux’ Handy JR, an electrical engineer who worked in the aviation industry, owned five Detroit Electrics, including ‘Clementine,’ a Model 62 cabriolet, bought in 1935 and kept until his death in 1996.  Handy senior liked the cars so much that in the late 1930s he became Detroit Electric’s corporate secretary, and even harboured plans of reviving the company.

Clementine remained in use until the 1970s, and the decade before made the Californian newspapers when, during an extended power failure, Jamison used her to power the family home – having first unplugged the fridge and TV! – something modern Detroit Electric vehicle owners will soon be able to emulate.

According to his son, Clementine (since bought and mechanically restored by an old car collector) was the product of a mature, sophisticated market for electric cars, which were especially popular among wealthy urban women and doctors.

Detroit Electric grew from the Anderson Carriage Company, which had been in business since the 1880s making horse drawn vehicles, but in 1906 its boss, William C. Anderson, saw a future in electric vehicles and began shipping his first cars the following year, making 125 Detroit Electrics by the end of 1907.

In 1908, he launched the appropriately named Inside-Drive Coupe, which had a closed cabin.  Since most early cars were open with the driver out in the weather, this was a real innovation, and became a feature of many electrics.  By 1910, the company was making 800 cars annually, peaking at 1,893 six years later.

This was also the year the Electric Vehicle Association of America introduced a standard charging plug – in three sizes – for all electric vehicles.

By then, Detroit Electric’s design template was well established, with battery packs front and rear, motors and control units under the passenger compartments.  The cars were tall and upright, and because the batteries were heavy, lightweight materials such as aluminium were used in their bodies – including one-piece, shaped aluminium roofs for the closed, four-seat Broughams that became Detroit Electric’s signature models.

These were also the world’s first cars to have curved side glass, a feature that flagged up their city-friendly lack of blind spots.  Anderson had a design patent on these ‘clear vision’ models.

Early petrol cars were dirty, had reliability issues and could be tricky to start, usually with crank handles.  According to Galen Handy, doctors often chose electric cars because they could be used instantly – which could make all the difference in a medical emergency.

By the time Detroit Electric was leading the market, home charging equipment was also well established, making the cars convenient and painless to use.

They were easy to drive too, with tiller steering, a pair of pedals (brake and release) and a simple lever to increase speed or slow the car. By comparison, controls for petrol rivals had yet to be standardised, and some had a daunting array of levers and pedals.

According to Galen Handy, many female customers could leave their chauffeurs at home, so husbands were unable to check up on where they’d been.  Their cars’ quietness and the popular closed cabins made them ideal mobile meeting places for friends, and since they could be locked, shopping and valuables could be safely left behind.

Many had interior décor and features like built in powder compacts, aimed at women buyers.  When he was a 1930s student, Galen’s father’s second Detroit Electric had a blue silk interior.  “He was a bit tone deaf to fashion, and his college friends teased him –that’s why he traded it for the convertible,” said Galen.

He developed nickel-iron batteries for Detroit Electric vehicles.  These were lighter and quicker to charge than lead-acid batteries, but had a lot of teething troubles and added $600 to the price of the cars.  But once reliability issues had been overcome, they proved incredibly long-lived.  Some surviving Detroit Electrics are still powered by them, and nickel-iron technology, as nickel-metal hydride, still has applications today.

Detroit Electric claimed a range of about 80 miles between charge up helped by a city-friendly top speed of about 25mph, and one of its cars achieved 211 miles.

So why did these clever, practical, well-engineered niche cars disappear? According to Galen Handy, the 1912 arrival of the Kettering electric starter for petrol engines didn’t help.  Petrol cars became a lot more reliable, convenient and cheaper too –a Ford Model T cost under $500 in 1914; a standard Detroit Electric was almost four times as much.

As petrol cars grew cheaper, electric ones became yet more expensive. Between 1914 and 1917 prices for commodities like copper and lead – used in their batteries – doubled, thanks to increased weapons production in the First World War.

The very last ‘old school’ Detroit Electric was assembled in 1939, and in the decade before that few new cars had been built, although the company did refurbish older ones.

Now over seventy years later, it’s clear that Detroit Electric wasn’t out of time, but ahead of it, and that Jamison ‘Jux’ Handy’s dream of modern electric cars bearing this famous name – a dream shared by Detroit Electric Group CEO Albert Lam – has finally come true.

The time is right to rekindle the pioneering spirit of Detroit Electric as the era of the combustion engine begins to loosen its grip, and the promise of an exhilarating pure electric driving experience becomes a reality.

Detroit Electric’s collective determination is to change perceptions of electric energy, better everyday driving and challenge the motor industry. And it begins with the exhilarating SP:01. This is the first of a family of technologically advanced electric vehicles that all promise to deliver Pure Electric Performance.